Biden’s infrastructure win gives him some momentum. Here’s why he needs that 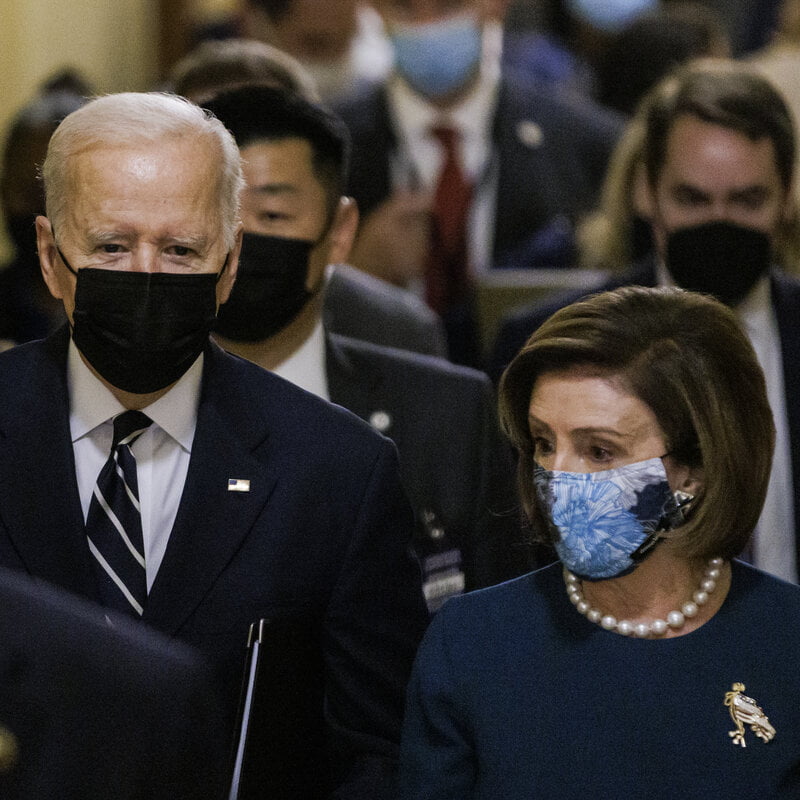 WASHINGTON, DC - OCTOBER 28: U.S. President Joe Biden walks into the U.S. Capitol building with Speaker of the House Nancy Pelosi (D-CA) for a meeting with House Democrats on the continued negotiations over the domestic spending Bills before the President departs for Europe on October 28, 2021 in Washington, DC. President Biden is heading to Rome where he will meet with leaders from the G20 as well as the Pope in the Vatican as Democrats are continuing internal negotiations about his administration's social policy spending bill. (Photo by Samuel Corum/Getty Images)

npr– Friday night was a long one for President Biden, working the phones at the end of a week where his party lost a bellwether race in Virginia, following months of Democratic infighting over his agenda. Down in the polls, he had just returned from an overseas trip where he said he faced questions about whether he had support to back the pledges he made on the world stage.

But by Saturday morning, Biden could not contain his ebullience, celebrating a major legislative victory: a long-stalled $1.2 trillion infrastructure bill had passed with bipartisan support.

“Finally, infrastructure week,” Biden said, chuckling over what had become a running joke about his predecessor, who failed to ever make a deal on the investment needed for the nation’s roads and ports despite often promising to focus on the problem. “I’m so happy to say that: infrastructure week,” he said.

The bill’s passage — combined with some positive news on the economy and the pandemic — could give Biden some momentum for tackling the next big piece of his agenda, a sprawling package of social programs, an overhaul of the tax system and billions of dollars of climate incentives. The size and scope of the plan has exposed deep division within his own party. But it’s another win he’s eager to secure ahead of looming 2022 congressional elections.

“The week started rough for Biden, but the [infrastructure] win and great jobs numbers shows the path by which Biden can turn this around,” said Jennifer Palmieri, who worked in the Obama White House.

But there are a host of forbidding odds working against Democrats as they head into the 2022 midterm elections, says Doug Heye, a Republican political consultant. “Inflation, national security, the border and so much more,” Heye said. “It’s hard to find an issue where Democrats have an advantage now.”

Biden says he needs to do more to explain his bills

He said he wants to hold a signing ceremony for the infrastructure bill along with the Republicans who were key to its passage in both the House and Senate — a nod to an idea he campaigned on, that Washington can work for the American people despite political polarization.

His advisers have also acknowledged that the White House needs to do a better job explaining their giant legislative packages to Americans.

His first bill, a $1.9 trillion COVID aid package, contained a series of measures that Democrats have had a hard time getting credit for, including monthly child tax credit payments. This week, Biden said he’ll be talking about ports — a sector that will get a lot of long-overdue investment of $17 billion from the infrastructure package.

In Biden’s view, his job now is to try to “put people at ease and let them know there’s a way through this,” whether it’s the pandemic or the supply chain snarls that he says have shaken Americans’ confidence. “Whether you have a Ph.D. or you’re working, you know, in a restaurant, it’s confusing. And so, people are understandably worried,” he said.

Economic concerns have helped fuel the tumble in Biden’s approval ratings. He went from a very bad August, after the chaotic U.S. withdrawal from Afghanistan and the surge in COVID cases, to a not-much-better September, and slumped into October.

But on Friday, in addition to the infrastructure bill passing, the jobs report showed a big jump with 531,000 jobs created in October, and the unemployment rate falling to 4.6%. And social media started filling with photos of children getting their COVID vaccines, after a CDC recommendation came through making it possible for kids ages 5-11 to get a shot.

“I have one focus,” Biden said on Saturday. “How do we give you some breathing room? How do we get you to the point where we take pressure off you so you can begin to get back to a degree of normality and we move to a different place?”

Biden worked the phones to get the bill passed

As a senator in the 1990s, Biden boasted about his ability to find common ground and get big legislation passed. As president he has struggled to drag what he called the “once in a generation” infrastructure package over the finish line, wading through weeks of procedural wrangling and ugly congressional sausage-making.

Biden and top aides worked the phones from the presidential residence late into the night on Friday, making sure wavering Democrats didn’t balk. The progressive wing had wanted to use the infrastructure bill as leverage to ensure Biden’s social spending package also passes. After the deal was already sealed, Biden even called the mother of a key House Democrat, Rep. Pramila Jayapal, a classic Biden move.

He has also had conversations with moderates, who are concerned he is spending too much time shooting for transformational programs and not enough time on kitchen-table issues. That was the takeaway for some Democrats from the loss in Virginia’s gubernatorial race on Tuesday.

Asked about Spanberger, Biden described her as a friend, and said they had joked about it afterward. But he stood resolute behind his strategy to go big when it comes to giving Americans relief through the social programs in his next big bill.

“I don’t intend to be anybody but Joe Biden. That’s who I am. And what I’m trying to do is do the things that I ran on to do,” he said. “Ordinary, hard-working Americans are really, really — been put through the wringer the last couple years, starting with COVID,” he said.

And he maintained that Democrats should see Tuesday’s election loss as a call to forge ahead on his plans. “They want us to deliver,” Biden said of voters. “Last night, we proved we can.”

The next bill may be tougher for Democrats to pass

Former Obama aide Palmieri said this week’s elections lit a fire under her party. “The losses had the necessary impact of focusing Democrats on getting the very popular bipartisan infrastructure bill done,” she said.

But first, Biden will need to knit together the progressive and moderate wings again. Republicans have already said they will not support the next package, which has tax increases on the wealthy to pay for extending the child tax credit, universal pre-K and elder care, and other Democratic wish-list items.

Biden has faced questions about whether he was forceful enough in forging consensus — or too willing to accept compromise. On Saturday, he defended his approach of brokering deals. “You can’t have all you want. It’s a process,” he said, explaining that it is taking time to build up trust.

There is no guarantee the larger package will pass. Biden has been steadfastly mum on whether he has secured commitments from Senate moderates, who have raised concerns about the cost of the social safety net and climate package. But on Saturday, in the State dining room, Biden said he thinks it will happen.

“I feel confident that we will have enough votes to pass the Build Back Better plan,” Biden said. When a reporter asked what gave him that confidence, Biden responded with one word. “Me.” 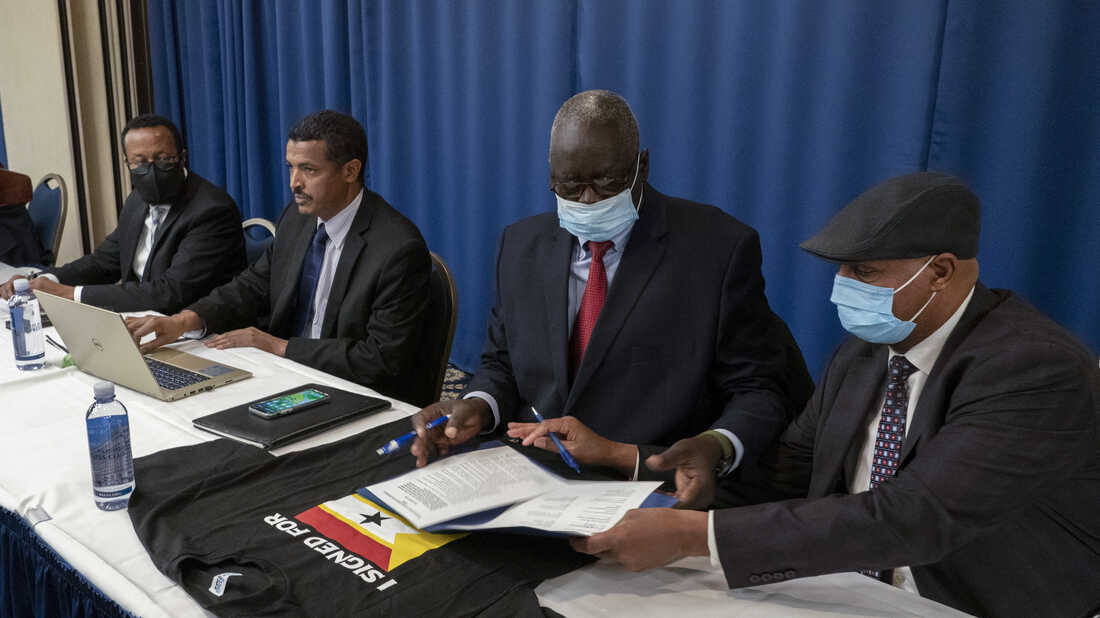 Previous post Rebels are closing in on Ethiopia's capital. Its collapse could bring regional chaos 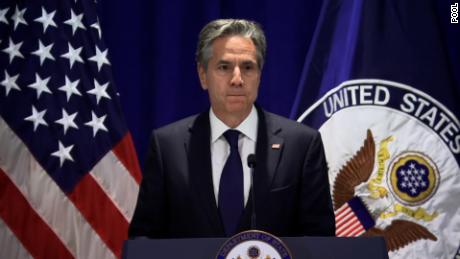