Cam Newton #1 of the Carolina Panthers reacts after a play against the Atlanta Falcons during their game at Bank of America Stadium on November 5, 2017 in Charlotte, North Carolina. (Photo by Streeter Lecka/Getty Images)

The Carolina Panthers team could sell for as much as $2.8 billion, The Charlotte Observer reported Thursday. 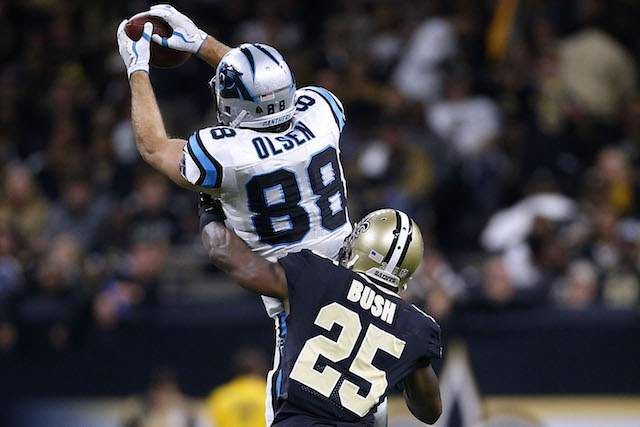 Greg Olsen #88 of the Carolina Panthers catches the ball as Rafael Bush #25 of the New Orleans Saints defends during the second half of the NFC Wild Card playoff game at the Mercedes-Benz Superdome on January 7, 2018 in New Orleans. (Photo by Jonathan Bachman/Getty Images)

Billionaires David Tepper, Ben Navarro, Felix Sabates and Frank and Lorenzo Feritta are all reportedly interested in becoming owners of the Carolina team. Steph Curry, Sean Combs and Colin Kaepernick have also reportedly been interested in getting in on the action.

Under the NFL rules, as many as 25 people can own a team, as long as one of those people owns 30 percent of the team, which would put that price tag at $690 million or more.

Longtime owner Jerry Richardson put the team up for sale in December following allegations of workplace misconduct. A Sports Illustrated piece reported that the team made multiple payouts for alleged sexual harassment comments and the use of a racial slur.

Notable that Richardson’s statement doesn’t address the allegations and basically suggests he just decided today it was time for new ownership pic.twitter.com/NbEx9c0Aa5