To be able to catch a buzzy opening film well ahead of the time the rest of the world will watch it, is one of the great joys of being at a great film festival.

Here I am, back at the Berlinale which kickstarts the global calendar. Well, sure, the festivals at Sundance and Rotterdam take place just before, but for sheer staggering scale and diversity—over 400 wildly differing films, spread over the city—there is nothing to beat it. Like all the other delegates who are running on adrenaline after long sleepless nights changing planes and time zones, I’m in a queue to get into Wes Anderson’s Isle Of Dogs literally a couple of hours after landing in chilly Berlin.

There are three press shows, but there are also hundreds of press persons, armed with a festival junkie glint that only another recognizes, and we run from the one theatre at the Cinemax which is packed out, to the next, and grab our places just in time. That’s the other thing we do at film festivals: stand in snaking queues, till we get old.

Isle Of Dogs reunites Anderson with the stop-motion technology which he used so well in his previous top-notch animation Fantastic Mr Fox. His new fable (all Anderson films are fables, more or less; and Isle Of Dogs speaks to the general global atmosphere or rising intolerance) is set twenty years hence in Japan, about a young boy looking for his lost dog, and is his homage to Japanese cinema (Kurosawa, anime, Ishiguro), and, also, of course, the very American Wall E. 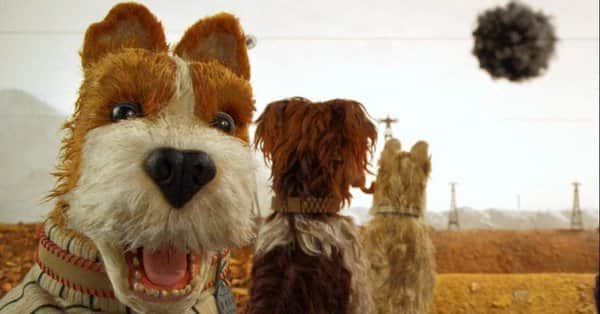 Because this is a Wes movie, we get world-class artistry in the creation of a very Wes universe, where each element is beautifully presented. We also get whimsy and dollops of quirkiness, such a Wes trademark. Cats have taken over this world, and dogs have been banished to an island buried under garbage. As someone who loves dogs and admires cats, I’m very clear whose side I’m on, and appropriately enough, I’m left admiring the scenery and the intent, but not quite loving the film.

Most of the action takes place on a dystopian island where a bunch of dogs are struggling to get past the mounds of garbage. Of course, the filth is metaphoric too: in the fictional city of Megasaki, corrupt politicians rule, and 12-year-old Atari Kobayashi search for his dog can also be seen, quite properly, as a yearning for lost innocence. When Atari wins, and he does, with the help of his canine pals King, Duke, Rex, Boss and the growly chief, and the very whiplash-cute Nutmeg (voiced by Scarlett Johansson with raspy sensuousness), it feels like we’ve all won.

Anderson and his starry voice cast do their thing at the photo-call post film, and it’s as much fun to gawk at ensemble regulars Tilda Swinton, who’s looking as elegantly rangy as she has in previous red-carpet appearances at the Berlinale, Bill Murray, Jeff Goldblum, and new additions Greta Gerwig, Bryan Cranston, Ken Watanabe, and, yes, Yoko Ono.

Isle Of Dogs is a remarkable for its production design, but I found the story-telling, so distinctly Wes in its fast-slow rhythms, distant and affectless. My favourite Wes Anderson remains The Grand Budapest Hotel, which opened the 2014 Berlinale, which has heft because it has heart. But it’s always good to begin with a film which leaves you wanting more, and Day One ends with snowflakes swirling: more on the morrow from the festive Berlinale Palast at Potsdamer Platz.

Porus actor Sameksha: I’ve done enough running around the trees in south films, now I want to do character roles