An investigation by The Times newspaper in London alleges Oxfam covered up misconduct by senior aid workers, including the then-country director Roland van Hauwermeiren.The newspaper says a confidential report by the charity found that van Hauwermeiren, who resigned in 2011, paid women for sex in the villa the charity had rented for him during the relief efforts. CNN has not independently reviewed the charity's internal report.Van Hauwermeiren has not commented publicly since The Times report on Friday. CNN's attempts to reach him have been unsuccessful.According to the paper, the report also found that "children may have been among those sexually exploited by aid workers," and that there had been a "culture of impunity" among some staff in Haiti.In a statement, the UK's Department for International Development (DFID) says it was informed by Oxfam in 2011 that an investigation had been launched but that at no time did Oxfam disclose that the allegations related to sex with underage girls or prostitutes. It says Oxfam's report to the UK Charity Commission only referred to "sexual misconduct"."We often work with organisations in chaotic and difficult circumstances. If wrong doing, abuse, fraud, or criminal activity occur we need to know about it immediately, in full. The way this appalling abuse of vulnerable people was dealt with raises serious questions that Oxfam must answer," the Department said in a statement on Saturday."We acknowledge that hundreds of Oxfam staff have done no wrong and work tirelessly for the people they serve, but the handling by the senior team about this investigation and their openness with us and the charity commission showed a lack of judgement. We have a zero tolerance policy for the type of activity that took place in this instance, and we expect our partners to as well."The International Development Secretary is reviewing our current work with Oxfam and has requested a meeting with the senior team at the earliest opportunity."Oxfam's own policy prohibits "sexually abusive or exploitative acts being perpetrated" by employees, including paying for sex. 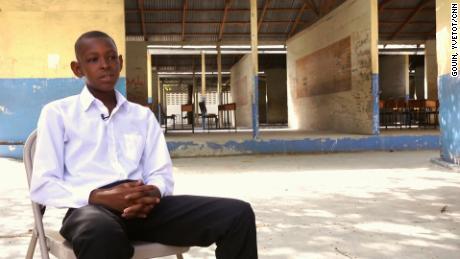 On Friday, Oxfam denied allegations of a cover-up, saying that as soon as it became aware of the allegations it launched an internal investigation resulting in the dismissal of four staff members and the resignation of three, including the country director.In a statement, the aid group said accusations that underage girls may have been involved were not proven, adding: "Our primary aim was always to root out and take action against those involved and we publicly announced, including to media, both the investigation and the action we took as a result."Oxfam said van Hauwermeiren "took full responsibility for events that took place under his management" and was permitted to resign if he fully cooperated with their investigation.Citing multiple aid agencies, a second report by The Times on Saturday said Oxfam failed to warn NGOs about the allegations, allowing some of those accused of sexual misconduct to secure employment with other organizations.Oxfam issued a statement in response to the second report, saying it believed "anyone engaged in such reprehensible behavior should be barred from working with vulnerable communities.""Oxfam has not and would not provide a positive reference for any of those who were dismissed or resigned as a result of the Haiti case," Oxfam said. "While there is nothing we can do to stop individuals falsifying references or getting colleagues to provide a reference in a personal capacity, there is clearly more that can and should be done to ensure that individuals who are found to be guilty of sexual misconduct do not continue to find work in the sector."The charity published a statement in August 2011 saying that it launched an investigation into allegations of misconduct against what it said was a "small number" of its staff in Haiti.On Friday, Oxfam said it received legal advice in Haiti that given the nature of the allegations and the turmoil the country was experiencing after the earthquake, it was "extremely unlikely that reporting these incidents to the police would lead to any action being taken."The aid group says it kept its trustees — the UK Charity Commission, the European Union, the World Health Organization (WHO), DFID and UN agencies — informed of the investigation and its outcome. CNN has requested comment from the European Union and the WHO.The Charity Commission told CNN in a statement that Oxfam informed them in August 2011 it was conducting an internal investigation related to inappropriate sexual behavior, bullying, harassment and the intimidation of staff."The report to us stated there had been no allegations, or evidence, of any abuse of beneficiaries. It also made no mention of any potential sexual crimes involving minors. Our approach to this matter would have been different had the full details that have been reported been disclosed to us at the time," the Charity Commission statement said.

Aid organization warned it could lose millions in funding