Penny Lawrence is the first executive at the organization to quit after the scandal and allegations of a coverup emerged last week.Oxfam announced the resignation after a meeting with UK government officials Monday, at which it had fought to keep millions of pounds in public funding.Oxfam's leaders are accused of trying to cover up the behavior of some of its senior staff members deployed to Haiti after the devastating 2010 earthquake that killed between 200,000 and 300,000 people.The aid workers — including the Oxfam country director at the time, Roland van Hauwermeiren — were accused of turning a villa rented by the organization into a makeshift brothel, with prostitutes wearing only Oxfam T-shirts. The Times newspaper in London made the allegations in an investigation published at the end of last week. "It is now clear that these allegations — involving the use of prostitutes and which related to behavior of both the Country Director and members of his team in Chad — were raised before he moved to Haiti," Lawrence said, referring to van Hauwermeiren."As program director at the time, I am ashamed that this happened on my watch and I take full responsibility."

Oxfam is one of the UK's largest and most prominent aid organizations, operating development programs in more than 90 countries around the world. The agency also offers assistance to people after emergencies and disasters.International Development Secretary Penny Mordaunt warned that Oxfam could lose millions of pounds in public funding because of the scandal. Oxfam received about £32 million (about $44 million) from the government last year, according to public records. Mordaunt said on Monday that the organization made a "full and unqualified apology" to her and to the people of Britain and Haiti. In a statement, Mordaunt said that the charity apologized for "the appalling behavior of some of their staff in Haiti in 2011, and for the wider failings of their organization's response to it."A Downing Street spokesman said Monday that the British government had taken action to enforce a "zero-tolerance approach" to allegations of "horrific behavior" by Oxfam staff. He gave no details on what the actions were.Oxfam could also face legal action in Haiti. The country is considering pursuing criminal charges, the Haitian chief of mission to the UK, Bocchit Edmond, told CNN on Monday. Edmond said that Oxfam representatives in Haiti would be summoned by the Foreign Ministry. "We will look at the issue, and hopefully there will be sharing of information, and then I believe there are some grounds for legal actions." Mordaunt said that Oxfam told her that they are cooperating with authorities in Haiti and in any other country where abuse is exposed. In a meeting on Monday with Oxfam Chief Executive Officer Mark Goldring and Chair of Trustees Caroline Thomson, Mordaunt said she told them they must demonstrate the moral leadership necessary to address the scandal and rebuild the trust of the British public, their staff and the people they aim to help. 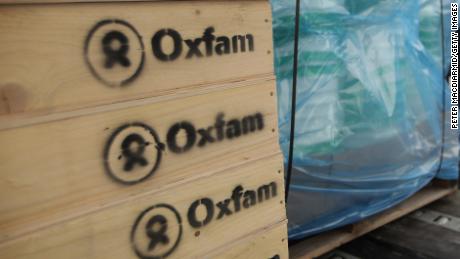 "It is on the basis of their actions going forward — rather than of their commitments in one meeting today — that I and others will judge them. I was clear that part of an organization's moral leadership comes from individuals taking responsibility for their actions."In an interview with the BBC, Goldring said that in his meeting with Mordaunt, he "recommitted to take still more steps because we know we have not done enough" to deal with the behavior.He added, though, that the issue of sexual abuse by aid workers is not limited to Oxfam. "This is a much bigger issue than Oxfam, who are among the leading agencies in trying to address it. Actually, it's an issue for the sector. Oxfam has failed — let me be clear on that — but it's a sector-wide concern."

A second report by the Times said Oxfam failed to warn nongovernmental organizations about the allegations, allowing some of the accused to get jobs at other aid agencies.The UK Charity Commission, an independent regulator of charities in England and Wales, opened a statutory inquiry into Oxfam following the revelations of sexual impropriety in Haiti. The decision to launch an inquiry comes after Oxfam provided the regulator with documents pertaining to allegations of misconduct by its staff in Haiti in 2011, the agency said in a statement Monday."The Commission has concerns that Oxfam may not have fully and frankly disclosed material details about the allegations at the time in 2011, its handling of the incidents since, and the impact that these have both had on public trust and confidence," the agency said.Previously, the Charity Commission told CNN that Oxfam informed the agency in August 2011 that the charity was conducting an internal investigation related to inappropriate sexual behavior, bullying, harassment and the intimidation of staff. But Mordaunt said the aid organization failed to reveal the scope and key details of the case. "They let individuals who had undertaken criminal activity, they let them go. They did not tell prosecution authorities, they did not tell their regulator and they did not tell their donors," Mordaunt told the BBC.Oxfam did not deny the accusations against its staff members, but it denied a coverup, saying that it launched a swift internal investigation after it became aware of the allegations. Four people were fired and another three resigned, including van Hauwermeiren, the charity said. 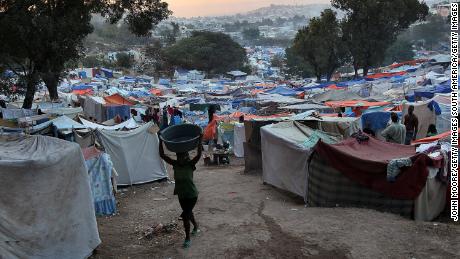 Oxfam's own policy prohibits "sexually abusive or exploitative acts being perpetrated" by employees, including paying for sex.Oxfam has announced it would strengthen its staff vetting procedures and introduce a whistleblower helpline as part of a package of reforms."It is not sufficient to be appalled by the behavior of our former staff — we must and will learn from it and use it as a spur to improvement," Thomson said in a statement.

'Tip of the iceberg'

On Sunday, the aid agency said it had been "shocked and dismayed" to hear more allegations about the use of sex workers by Oxfam staff in Chad in 2006."While we can't corroborate the information from Chad at the moment, it highlights again unacceptable behavior by a small number of people and the need for a sector-wide approach to tackle the problem," Oxfam said in a statement.Oxfam works with local farmers in Chad to improve their crops and provides water and sanitation services to refugees in local camps, the organization says on its website.The allegations against Oxfam in two different countries have raised concerns that the problem of sex crimes by aid workers abroad could be widespread. Mordaunt's predecessor, Priti Patel, shared concerns about a coverup and wrote in the Telegraph on Monday that the Oxfam scandal was just "the tip of the iceberg."In an interview with Sky News, Patel said, "I did my own research and I have to say I had a lot of pushback within my own department … that is the scandal.""People knew about this," she said. Patel resigned last year after making a secret trip to Israel and holding undisclosed meetings with Israeli officials, setting off a political firestorm. She also said that British nationals accused of wrongdoing while doing charity work abroad with public funds should be tried in the UK.

Skepta, N.E.R.D, Childish Gambino to headline Lovebox 2018 as it moves to Gunnersbury Park