The early rating numbers for NBC’s Sunday night coverage of the 23rd Winter Olympics in PyeongChang, South Korea, dropped compared to the 2014 and 2010 games. 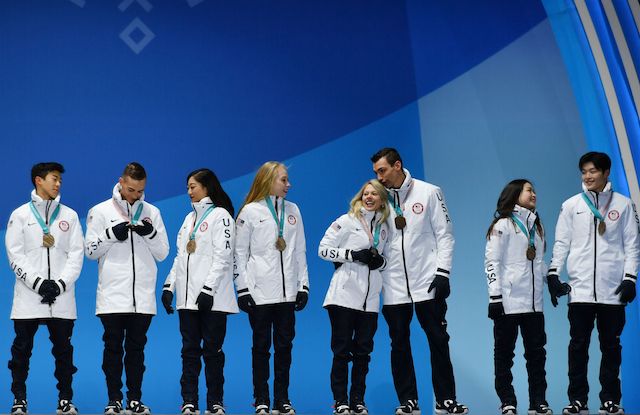 The USA team who won bronze pose on the podium during the medal ceremony for the figure skating team event at the Pyeongchang Medals Plaza during the Pyeongchang 2018 Winter Olympic Games in Pyeongchang on February 12, 2018. / AFP PHOTO / Fabrice COFFRINI (Photo credit should read FABRICE COFFRINI/AFP/Getty Images)

However, those numbers does not include the combined rating that NBC and NBC Sports had on Sunday night which saw a total of 16.5 in metered market households. When combined, those numbers are up five percent compared to Sochi coverage, which drew a 15.7 rating. The Sochi numbers, however, were just for the network broadcast, as the games weren’t shown on NBC Sports.

In the past, Olympics coverage has fluctuated from year to year and is largely based on what country is hosting and the time zones. The 2014 coverage from Sochi was down from the winter games in 2010 in Vancouver, Canada. However, Sochi fared better than the coverage in 2006 from Torino, Italy.

Farage Warns Of ‘Constitutional Crisis’ If Brexit Plans Are Watered Down