But this season, Popson has boycotted the NFL and he says it's all because of President Donald Trump."I stopped watching football this current NFL season after President Trump made his remark about team owners kicking out and firing any player who kneeled during the National Anthem," the 56-year-old told CNN. "… I will continue to boycott NFL games and if I happen to be found in front of the TV during the Super Bowl, it will only be because I am at a Super Bowl party with food and drink and more importantly, friends and family. I won't be focused on the game. Patriotism factors into this decision one hundred percent."Popson said that although he agrees "that people of color are targeted more and unjustly by law enforcement," the football field is not the place to make this statement.

This may very well go down in history as the season that changed football. The President of the United States declared a political war on some of the most visible players. And he wouldn't let it go.In an off-the-cuff speech at a rally in Alabama in September, the President unleashed a highly public crusade against black players who took a knee during the National Anthem to protest institutionalized racism and police brutality. Trump lambasted team owners for allowing the protests to take place, urged fans to walk out of games and told owners they should respond to the protesting players by saying, "Get that son of a bitch off the field right now, he's fired. He's fired!"The President's comments launched the National Football League, which has generally managed to keep politics at bay, into a heated and highly public debate on racism and patriotism in America.That weekend, owners, coaches and players of various teams joined hands and collectively took a knee in a remarkable and unprecedented show of defiance. And there's no sign that Trump — who kept coming back to the issue on Twitter throughout the football season and even, obliquely, during his State of the Union address Tuesday — is letting up. He made a spectacular patriotic show of going down on the field for the NCAA championship game in January, standing there for the National Anthem. But he's opting out of the traditional presidential pre-Super Bowl interview this year. Last year he sat down with Bill O'Reilly, then of Fox News. This year NBC is broadcasting the game."Because (Trump) is this polarizing figure who chose to draw a line in the sand, it just shone a spotlight on the debate and gave it a kind of national profile that it might not have had if he hadn't actually entered the fray," Dr. Theresa Runstedtler, a history professor at American University who studies the intersection of sports, race and politics, told CNN.Trump forced coaches and owners to pick sides.New York Giants owners John Mara and Steve Tisch expressed disappointment over the President's comments. Meanwhile, Dallas Cowboys owner Jerry Jones, after an early show of support, taking a knee with players before the National Anthem during a game, later sparked boycotts when he said he would bench players for "being disrespectful to the flag."Amid the upheaval, NFL commissioner Roger Goodell tried to have it both ways. He said the league wants players to stand for the anthem but stopped short of saying the NFL would institute an NBA-like policy that would force them to stand or penalize them if they don't. However, it's important to note that despite the fact that NBA players did not participate in protests on the court, coaches and players — from stars like the Cleveland Cavaliers' LeBron James and the Golden State Warriors' Steph Curry to coaches like Gregg Popovich and Steve Kerr — have been more outspoken and public in their criticism of Trump. 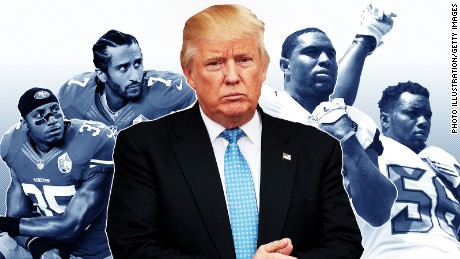 "(Trump) created a situation where that veneer of the invisibility of politics and the invisibility of race in the Super Bowl has been shattered in a lot of ways," Runstedtler said. "Regardless of which side you're on, you kind of have to actually confront the fact that the event is laden with racial politics."A group against the protests called "Standing for America" has nearly 300,000 followers on Facebook, and so far 26,000 people indicated they will participate in their event, "NFL Boycott — 2018 Super Bowl," to voice their support for veterans. And as the Philadelphia Eagles prepare to take on the New England Patriots — Trump's favorite team, given his friendly relationship with owner Robert Kraft, his golfing relationship with Tom Brady and the notes he's exchanged with Bill Belichick — at the Super Bowl this weekend, Eagles wide receiver Torrey Smith, who raised his fist on the field to express solidarity with the "Black Lives Matter" movement, has already indicated that he will refuse an invitation to the White House if his team wins. 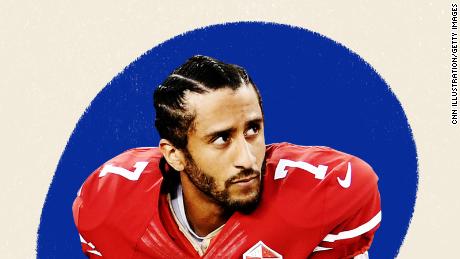 Even before Trump got into a fight with the NFL, sparking a boycott by conservatives, a boycott of the league among progressive and black activists was already in full swing. In Greensboro, North Carolina, a group of young activists started a "Kickball for Kaepernick" league to protest the perceived shunning by league owners and coaches of former San Francisco 49ers quarterback Colin Kaepernick."I was an avid football watcher before I began my boycott against the NFL and its repression of Kaepernick and the league's contempt for those who demand justice and an end to state violence against working class communities of color," Demetrius Noble, a 38-year-old professor, told CNN."I have been and am boycotting the NFL because of the structural racism that apparently permeates throughout a league that is majority black and because of the lack of attention paid to state sanctioned violence on the part of the NFL," LaKeisha Williams, a Philadelphia Eagles fan who is part of the league, told CNN. 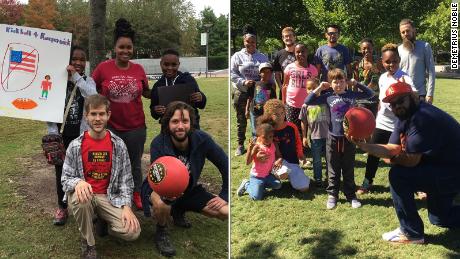 When Kaepernick took a knee during the National Anthem in September 2016 to protest racism, he quickly became one of the most controversial figures in sports, like several others before him, and sparked a wave of protests on the field that spread from professional football to college and high school and even to other sports. But according to Runstedtler, Trump elevated Kaepernick's national profile."If nobody had made a big deal out of it and turned it into a spectacle the protests would have been meaningless," she said. "It was actually the backlash against (Kaepernick) not standing for the anthem that ironically rained more awareness about (why he was protesting)." 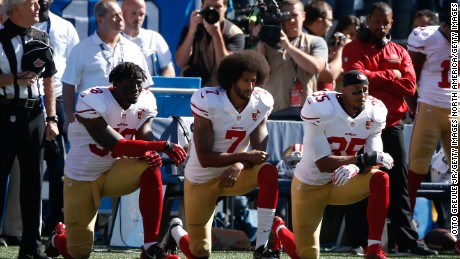 One month before he picked a fight with the NFL over the protests, Trump had stoked racial tensions deeply when he repeatedly appeared to suggest there's a moral equivalency between white supremacists and those who oppose them while responding to violence that erupted at a white supremacist rally in Charlottesville, Virginia. "His commentary just provided additional talking points and reinforcement concerning how the highest office of the USA is out to repress and castigate those who dare to stand for justice and the most vulnerable," Noble said, adding that Trump's rhetoric "reinforces why Kaepernick chose to kneel" in the first place.The President's comments — upon which he doubled and tripled down — prompted an onslaught of bipartisan criticism and fueled a barrage of new protests on the field. "Athletes, especially black athletes, realize that no matter how much money you make and how famous you are, when we have a president who constantly diminishes you and your people, it's time to step up and do something," NBA legend and civil rights activist Kareem Abdul-Jabbar told CNN's #GetPolitical at the time. 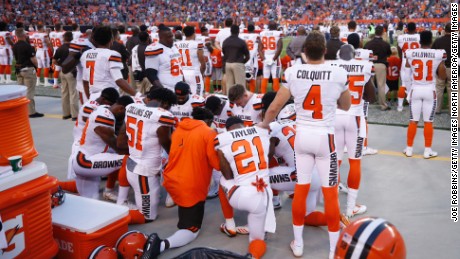 Amid bipartisan outrage over Trump's response to the violence that transpired at the rally, about a dozen members of the Cleveland Browns, including Seth DeValve — the first white player to join the protest — took a knee and prayed before a preseason game against the New York Giants on August 21. 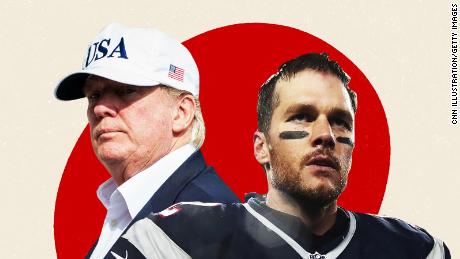 It doesn't help at all that Trump's all-time favorite team — the New England Patriots — has been so dominant.Last year, football fans compared the Patriots' historic comeback against the Atlanta Falcons in the Super Bowl to Trump's unexpected win against Democratic presidential nominee Hillary Clinton in the 2016 general election.At the time, the President congratulated the Patriots and his "friend" quarterback Tom Brady, tweeting, "What an amazing comeback and win by the Patriots. Tom Brady, Bob Kraft and coach B are total winners. Wow! #SuperBowl."But Brady, who had received backlash in 2015 when a "Make America Great Again" hat was spotted in his locker, has been evasive when asked about his relationship with the President. 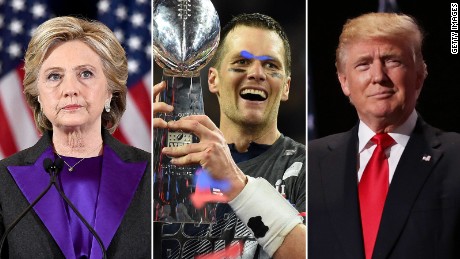 And in a highly publicized move that likely embarrassed Trump — although the President chose not to address it publicly — the five-time Super Bowl champion surprised many when he skipped his team's visit to the White House last year, citing "family matters."At the time, the Boston Herald reported that Brady was spending time with his mother, who was battling an illness later revealed to be breast cancer.Several of Brady's teammates had refused to go for the White House visit, citing their opposition to Trump. The smaller attendance by the Patriots for Trump than for former President Barack Obama, when he had hosted the team, drew scrutiny and an excuse from the team. And two days after Trump urged owners to fire players who won't stand for the anthem, the Patriots took a stand against Trump. Three dozen players took a knee, while the rest locked arms on the field. Trump put the Patriots in the political spotlight repeatedly over the past two year, announcing a day before the general election that Brady and coach Belichick were supporting his campaign for president. 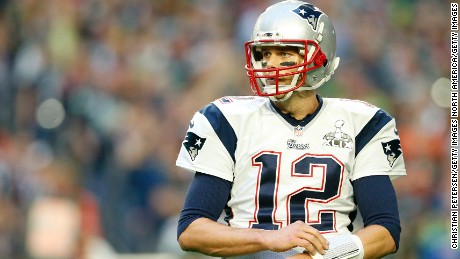 The President also said at a pre-inaugural dinner that Brady and Patriots owner Kraft called to congratulate him.While he did not deny it, Brady played down the claim during an interview, saying, "I call a lot of people.""I have called him, yes, in the past," Brady said. "Sometimes he calls me. Sometimes I call him. But, again, that's been someone I've known. I always try to keep it in context because for 16 years you know someone before maybe he was in the position that he was in. He's been very supportive of me for a long time. It's just a friendship. I have a lot of friends. I call a lot of people."A lot of people still watch the NFL, but viewership is down. And while various factors could be in play, thousands of Americans from the left and the right have expressed that they stopped watching to make a statement about the debate on race and patriotism in America, which was intensified and elevated by the President's unrelenting war with the NFL.For more on the intersection of culture and politics, check out CNN's #GetPolitical series.

5 killed and more than 40 injured after a vehicle barreled through a Wisconsin Christmas parade, Waukesha officials say

Biden’s infrastructure win gives him some momentum. Here’s why he needs that