| Published: January 1, 2018 12:10 am From Shah Rukh Khan and Ranbir Kapoor reinventing themselves to AR Rahman celebrating 25 years in the industry, there is much to watch out for this year. Meanwhile, the cultural calendar is buzzing with several exhibitions and performances

The din over a much-desired reinvention of Shah Rukh Khan grew louder when he failed to woo the audience as the wearisome tourist guide in Jab Harry Met Sejal, while Ranbir Kapoor’s much-awaited Jagga Jasoos failed to make a mark. Aanand L Rai’s untitled next features Khan as a dwarf and Rajkumar Hirani’s next, based on the life of actor Sanjay Dutt, has Kapoor as the lead. These movies offer possibilities to both the actors to move away from stereotyping. With Manikarnika: The Queen of Jhansi, Kangana Ranaut will get a chance to prove her box-office pull that floundered in 2017 when Simran released.

The year has some new pairs worked out even as some of the veteran co-actors will team up to recreate screen magic. Zoya Akhtar’s Gully Boy brings together Ranveer Singh and Alia Bhatt for the first time. Bhatt is cast opposite Vicky Kaushal in Meghna Gulzar-directed Raazi while Nawazuddin Siddqui is working with Rasika Dugal in the Nandita Das-directed Manto biopic. Some old pairs would be back: Anushka Sharma and Katrina Kaif are reunited with Shah Rukh Khan in Rai’s next, Amitabh Bachchan and Rishi Kapoor in Umesh Shukla-directed 102 Not Out; and Anil Kapoor and Madhuri Dixit in Indra Kumar’s Total Dhamaal.

Aditya Dhar-directed Uri is based on the Uri attacks and its aftermath. It features Vicky Kaushal and Paresh Rawal in lead roles. Super 30, directed by Vikas Bahl, is a biopic based on the life of mathematician Anand Kumar, who is known to have a perfect record of getting his batch of 30 students to clear IIT-JEE. Hrithik Roshan is currently busy preparing to play Kumar. Vishal Bhardwaj’s Abbottabad captures the last few days of Osama bin Laden while he was in exile. The film is based on a book titled The Exile: The Stunning inside Story of Osama bin Laden and Al Qaeda in Flight.

The big announcement from the Ministry of Culture in 2017 was the Theatre Olympics. To be held between February 17 and April 8, 2018, the event will have 500 productions from 17 states. Among the selections are Bisadkal by Prabir Guha’s Alternative Living Theatre, Debashis Ray’s Char Oddyay, Man of the Heart by Suman Mukherjee, Beyond Chitrangadha by Sanchaita Basu, Macbeth Mirror by Santanu Das, Bhelay Bhase Sita by Tarun Pradhan and Rajrokto by Bibhash Chakraborty.

Turn Up the Margins

The International Theatre Festival of Kerala turns 10 in January, and focusses on the lives unfolding at the margins. Sixteen international and an equal number of Indian plays will be performed between January 20 and 29, in and around the sprawling Sangeetha Nataka Akademi campus in Thrissur. It will feature voices, people and ideas that have been suppressed, dismissed or otherwise undervalued. Seminars will be held on subjects such as “Gendering Theatre” and “Theatres of Resistance”.

The Dr Bhau Daji Lad Museum (BDL), Mumbai’s oldest museum, has had a tumultuous history — from opening as a natural history museum in 1857, called the Victoria and Albert Museum, to getting its present name in 1957, to falling into disrepair in 1997 and then finally, reopening to the public in 2008 with a new vision. To celebrate their 10th anniversary, the BDL will be opening the year with a major exhibition, titled “Asymmetrical Objects”, on January 19. The show meditates on the current Anthropocene epoch and will feature works by Atul Bhalla, Jitish Kallat, Manish Nai, Mithu Sen, Prajakta Potnis and Ranbir Kaleka.

The fourth edition of the Kochi-Muziris Biennale is awaited for more reasons that one — spearheaded by a woman curator for the first time, there is ample curiosity regarding Anita Dube’s selection of works and artists. Speaking about her vision, Dube had stated, “My subjectivity and worldview will be involved. I am interested in bringing in the voices of those who have been marginalised: women, dalits, the gay community.” To be held between December 2018 and March 2019, the Biennale has only announced one participant till now — Baroda-based Nilima Sheikh.

Founded by Neha Kirpal in 2008, this is the first year when the India Art Fair will not have her at the helm. Jagdip Jagpal, who has worked on a number of cultural projects in the UK, China and the South Asian region, has taken over as director of the annual fair. To be held from February 9 to 12 in Delhi, the fair will see participation from several domestic and international galleries. Platform, which acts as a springboard for emerging art practices and art collectives from South Asia, will welcome tribal art forms and Delhi Crafts Council for the first time. 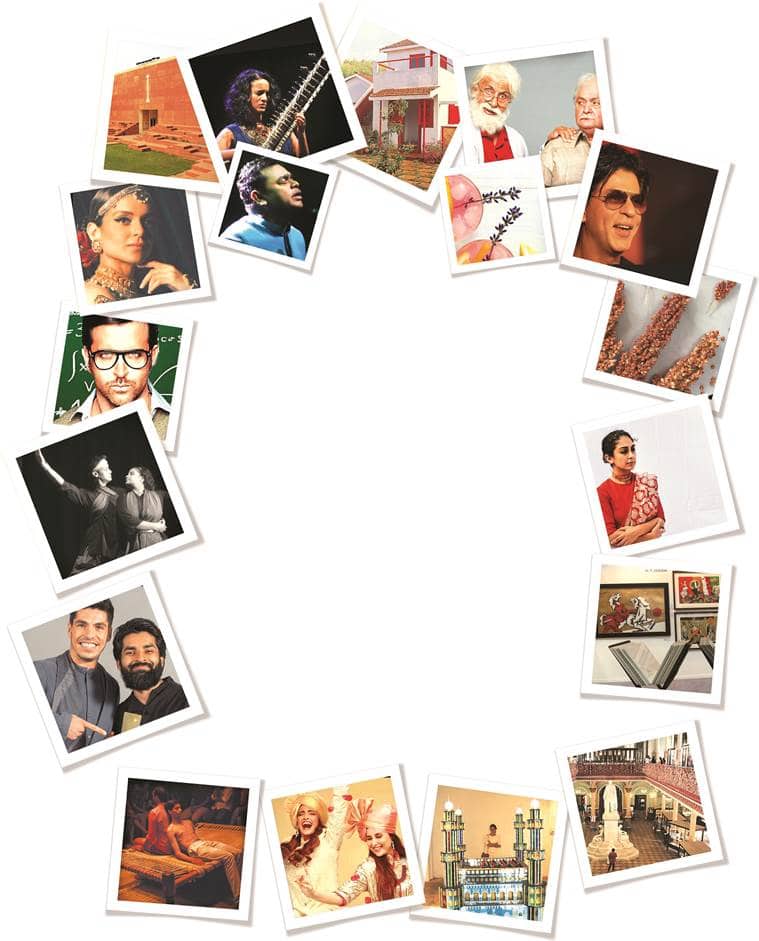 The union of Bollywood and fashion is a marriage made in heaven and all set to add to the band, baaja, bridal vibe this year will be film-producer-cum-stylist Rhea and actor sister Sonam Kapoor’s next home production, Veere Di Wedding. The venture — starring Sonam, Kareena Kapoor Khan, Swara Bhaskar and Shikha Talsania — is likely to get a thumbs-up in the styling department, thanks to Abu Jani and Sandeep Khosla, who have turned costume designers for the project. The film releases in May.

It has been a decade since Sanjay Garg formally launched Raw Mango at the Dastkari Haat Samiti exhibition in Mumbai. This year, Garg is set to celebrate a decade of his unique take on traditional textiles with the launch of “Midnight”, featuring hand-painted plants rendered on silk, organza and tissue saris at the beginning of the year. Not only will he be creating other collections featuring chikankari, chanderi, brocades and more through 2018, he is also working on a special presentation and several exciting collaborations.

The prestigious International Woolmark Prize competition will have a marked Indian presence this year as well. With past winners such as Rahul Mishra and Suket Dhir leaving their mark on the global fashion scene, this year will see two more regional finalists from India compete for the coveted title. Antar Agni by Ujjawal Dubey and Ruchika Sachdev of Bodice are the menswear and womenswear finalists, respectively, from the Indian subcontinent and the Middle-East regional rounds. They will compete for the grand prize in Florence on January 9.

Mindful eating has ensured a purposive shift to organically cultivated food and this trend will continue in 2018. More people are incorporating super-foods such as amaranth, sorghum and finger millets into their diets. Even restaurants are making concerted choices to assimilate this shift. However, apart from making these ingredients readily available, a culture of regular consumption needs to be cultivated.

Taking a hint from Beat poet Allen Ginsberg, chefs will ensure vibrancy on the plate by putting the diverse edible flora of the country to frequent use. While hibiscus and elderflower made appearances in our drinks in 2017 and rose has been a favoured garnish in desserts, flowers like the abundantly found genda or marigold, mint and cilantro flowers, banana and pumpkin blossoms, sunflower, lavender, lilac and jasmine will probably be featured regularly on our platters.

Nearly a dozen of India’s best-known design firms will come together to examine themes of the city, the act of building, the idea of history, and professional process as part of the exhibition “The Death of Architecture”. The show begins on February 23 in Mumbai, and will travel to 15 other Indian cities. While architect Samira Rathod looks at a tobacco town in the outskirts of Vadodara, architect Pramod Balakrishnan investigates a temple town near Chennai, and architect Riyaz Tayyibji questions the engagement with the centre and the periphery.

What could possibly be common between Charles Correa and Sawai Jai Singh of Jaipur? An exhibition on contemporary architecture in India, titled “When is Space?”, curated by Rupali Gupte and Prasad Shetty, presents multi-scale intersections between the architect and the king. Presented at the Jawahar Kala Kendra, the event will open on January 21, and aims to mark the similarities in several of their projects.

The exhibition “State of Housing – Aspirations, Imaginaries and Realities in India” will bring together the varied perspectives that go into the understanding of housing, which includes architects, urban designers, planners, local governance bodies, real-estate developers, financial institutions and policymakers. Curated by Rahul Mehrotra, Ranjit Hoskote and Kaiwan Mehta, the showcase will be held at Goethe Institut – Max Mueller Bhavan, Kala Ghoda, Mumbai, from February 2 onwards.

Music in the Park

After a short hiatus, when SPICMACAY held its famed “music in the park concert” in 2010, they chose Pt Ravi Shankar to restart the series in Delhi’s Nehru Park. On a cold December evening, he had played a memorable concert with daughter Anoushka by his side. She’d pick up from wherever he would leave — learning, presenting, all at the same time. While Shankar mesmerised his audience in what was to be his last concert in the Capital, Anoushka faltered often. But that has changed in the last seven years and the 35-year-old has come into her own. In 2018, she will take the prestigious Nehru Park stage, which has mostly been graced by much senior artistes and also had her father as a fixture. Will she find success and an audience?

It was in 1992 that AR Rahman entered our consciousness with Mani Ratnam’s Roja, a film with compositions that became a part of our being through their simplicity and inventiveness. Rahman will return to the city of his birth, Chennai, in January to conclude the 25-year celebration of his career through a visual and audio extravaganza. At a concert titled “Yesterday, Today and Tomorrow”, Rahman will present various pieces of significance from his oeuvre.

The post 2018 Looking Ahead: 18 Things To Look Forward To appeared first on News Wire Now.

New Years Eve TV: How to Watch Everyone Freeze in Times Square