Anushka Sharma and Virat Kohli’s fairytale wedding celebrations are far from over. After a hush-hush wedding ceremony in Tuscany, Italy and a reception in New Delhi, the newlyweds are hosting a grand reception for their industry friends in Mumbai tonight and the pictures from the starry affair are already breaking the internet.

The decor looks royal and this time too, Anushka and Virat look dreamy as ever. While Anushka is donning a pretty golden lehenga complete with the wedding bangles in her hand, Virat is seen in a dapper blue blazer and white pants. Bollywood stars like Ranveer Singh, Shah Rukh Khan, Amitabh Bachchan are all reportedly expected to grace the occassion.

Bollywood celebrities such as Sara Ali Khan, Boman Irani, Vidhu Vinod Chopra, Prasoon Joshi, Aditya Roy Kapur and Sidharth Kapur have already arrived. The wedding reception is taking place in the Astor Ballroom at St Regis hotel in Lower Parel. Virat’s cricket buddies and Anushka’s Bollywood friends have started to arrive at the venue and already made it the party of the year.

Check out more pictures from the reception: 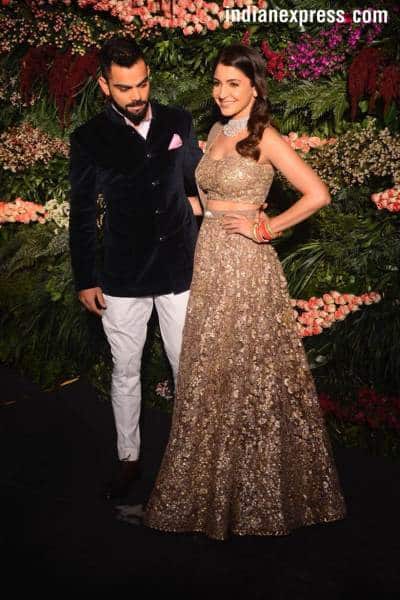 Sara Ali Khan looks like a princess at the reception. Anushka Sharma and Virat Kohli looked like a match made in heaven at their Delhi reception too. While Anushka donned a red Sabyasachi saree, Virat went for a dapper sherwani redefining royalty. Another exclusive video of @imVkohli and @AnushkaSharma arrive at St Regis hotel in Mumbai’s Lower Parel for their post wedding reception! #VirushkaReception#Virushkapic.twitter.com/3KqLjzVQ80

Another exclusive video of @imVkohli and @AnushkaSharma arrive at St Regis hotel in Mumbai’s Lower Parel for their post wedding reception! #VirushkaReception#Virushkapic.twitter.com/z6gNy7cfU7

Earlier today, the much-in-love couple was seen exiting the airport and the paparazzi went gaga over clicking their pictures.